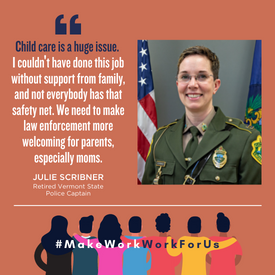 In her 20-year career with the Vermont State Police, Julie Scribner encountered an “astonishingly low” number of women with young children on the force.

“When I came on the job, I was a single mom. My kids were turning 5 and 10. This is not the kind of job that’s conducive to single parenthood,” Julie says.

Julie’s ex-husband took the kids when she was at the police academy and the kids lived with her mom for a time when Julie was working a lot of overnight shifts.

“I couldn’t have done this job without support from family,” Julie said. “But not everybody has that safety net.”

Law enforcement is a male-dominated profession and of the women that Julie did serve alongside during her tenure, very few had children.

“The child care issue is really problematic. When you have to work night shifts, you’re not going to find child care that goes until 2 or 3 in the morning. And if you do, you can’t afford to pay for it,” she said.

While women make up just 13 percent of the Vermont State Police force, that is almost double the national average for state law enforcement agencies.

“The best police department in the world would be one that represents the community that it serves. In Vermont, that would be roughly 50/50 women and men,” Julie said.

Julie, who retired in September 2021, played an instrumental role in Vermont State Police becoming the first state law enforcement agency in the country to sign onto the 30 x 30 Pledge, a national initiative to advance women in policing with a goal to have 30 percent of police recruit classes be composed of women by 2030.

Julie believes women need to see themselves represented in advertisements and recruiting efforts. She also believes culture change is needed to make law enforcement more welcoming to women. A positive example of this Julie witnessed was when the department purchased a portable Mamava lactation pod when a pregnant officer expressed concerns about being able to breastfeed after returning from maternity leave.

“In order to be welcoming for women – and for all people – law enforcement needs to be proactive and not wait for situations to come up. We need to be asking ourselves how we can create a more inclusive work environment and culture,” Julie said.